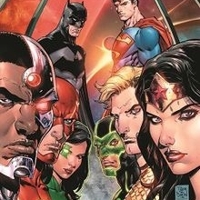 The team is an assemblage of superheroes who join together as the Justice League. The seven original members were Batman, Aquaman, the Flash, Green Lantern, Martian Manhunter, Superman, and Wonder Woman. The team roster has rotated throughout the years, consisting of many superheroes from the DC Universe like Atom, Black Canary, Captain Marvel, Green Arrow, Hawkman, and Plastic Man.2 The Justice League received its own comic book title called Justice League of America in November 1960. With the 2011 relaunch of its titles, DC Comics released a second volume of Justice League. In July 2016, the DC Rebirth initiative relaunched the Justice League comic book titles with the third volume of Justice League. Since its inception, the team has been featured in various television programs and video games and is set to appear in the live action film of the same name.