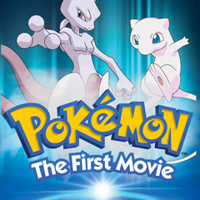 A group of scientists obtain a fossilised eyelash of the legendary Pokémon, Mew, and clone it to create a supersoldier named Mewtwo. The project is successful as it awakens, but upon learning the scientists plan to treat him as an experiment, Mewtwo unleashes his psychic powers and destroys the laboratory Giovanni, leader of Team Rocket and the project’s benefactor, convinces Mewtwo to work with him to hone his powers. However, Mewtwo learns his purpose was to be a weapon for Giovanni’s benefit and escapes back to New Island where he plots revenge against humanity. Several Pokémon trainers are invited to New Island to meet and battle the world’s greatest Pokémon Master. Ash, Misty, and Brock accept the challenge, but when they arrive at the port city Old Shore Wharf, a powerful storm whips up, preventing the trainers from sailing to the island. However, several trainers use their Pokémon to travel across the sea. Ash’s group are picked up by Team Rocket disguised as Vikings, but the storm sinks their boat, and they individually make it to New Island. Escorted into the island’s palace by a maid, the trainers encounter Mewtwo, who releases the maid from his mind control, revealed to be a brainwashed Nurse Joy. Mewtwo plots to use the storm to wipe out humanity, leaving only wild and cloned Pokémon alive. Ash challenges Mewtwo’s power, leading to a battle between the trainers’ Pokémon and Mewtwo’s clones who prove to be vastly superior in combat. Mewtwo captures all of the Pokémon to clone them, Ash chasing the captured Pikachu down into the rebuilt lab, where Team Rocket’s Meowth is also cloned. Ash destroys the cloning machine, freeing the Pokémon, and leads them to confront Mewtwo. Mew appears and confronts Mewtwo.