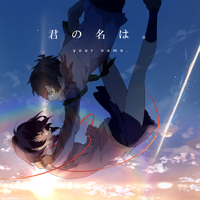 Mitsuha, a high school girl living in the town of Itomori, is fed up with her life in the countryside and wishes to be a handsome Tokyo boy in her next life. Later, Taki, a high school boy living in Tokyo, wakes up and realizes that he is Mitsuha, who herself has somehow ended up in Taki’s body. Taki and Mitsuha realize they have been transported into each other’s bodies. They start communicating with each other by leaving notes on paper or leaving memos in each other’s phones. As time passes, they become used to the body swap and start intervening in each other’s lives. Mitsuha helps Taki in getting closer to his female coworker, Miki Okudera, and eventually landing a date with her, while Taki helps Mitsuha in becoming more popular in her school. Mitsuha then tells Taki about an upcoming comet and how she is excited to see it, as it will arrive at the same day as her town’s festival. One day, Taki suddenly wakes up back in his body. After an unsuccessful first date with Miki, he tries contacting Mitsuha but fails. He later finds that they have stopped switching bodies and eventually decides to visit Mitsuha in her hometown. Without knowing the name of her village, he travels around rural parts of Japan, relying solely on the sketches of the village’s scenery that Taki drew from memory. Finally, a restaurant server recognizes the town in Taki’s sketch as Itomori. He is then told that a fragment of the comet Mitsuha had actually fallen to earth three years ago and destroyed Itomori, killing a third of the town’s population. As Taki looks through the records of fatalities from the incident, he finds Mitsuha’s name.