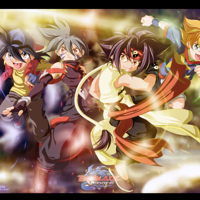 At the start of the season, the Bladebreakers had split up. Each encountered a mysterious hooded blader who defeated them (except for Kai, who had a draw with his opponent). They later discover that these bladers are Ozuma, Dunga, Joseph and Mariam, a group called the Saint Shields, seeking to seal away the Bladebreakers’ Bit-Beasts, saying that they are sacred spirits whose power must not get into the wrong hands.

Meanwhile, another group goes after the team’s Bit-Beasts. This group is a beyblading corperation Team Psykick, led by Gideon (Voiced by: Len Carlson) & Doctor B (Voiced by: Kent Williams), seeking to capture the Bladebreakers’ Bit-Beasts using any means possible. First, they lure the team to an island rigged to their advantage, pitting each member of the Bladebreakers against one of their own bladers, and try to capture their Bit-Beasts with machines. After much deliberation the protagonists are able to beat each one of these bladers and keep their Bit-Beasts safe, to be rescued from the island by Mr. Dickenson in a helicopter, to Gideon’s Battle Tower.