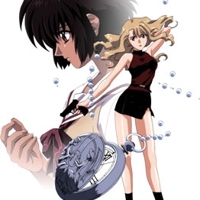 Noir follows the story of two skilled assassins — The Japanese amnesiac Yuumura Kirika, and the Corsican Mireille Bouquet. Due to their vague similarities and having no memories of their past, the duo decides to embark on a journey to answer their question and donning the name Noir.

As they go through their quest for truth, they discover more about the Les Soldats, and the dark secrets that lie within it.

Noir is an action anime television series written by Ryoe Tsukimura. Produced by studio Bee Train under the direction of Kouchi Mashimo; Noir aired a total of 26 episodes spanning from April 6, 2001, to September 28, 2001. A live-action adaptation was proposed, however, the project remained at a standstill since January 2013.

Episode 1: “Maidens with Black Hands”
Mireille Bouqet, a gun-for-hire based in Paris, receives an invitation through e-mail from Kirika Yuumura. After learning that they share some similarities, Mireille decides to meet Kirika. Later, the duo names themselves “Noir”.

Episode 2: “Daily Bread”
Noir is hired to eliminate a mole within the GIGN. So far, 2 units in the GIGN had already been killed, and a French member recently lost his family to a bombing.

Episode 3: “The Assassination Play”
An anonymous entity hires Noir to kill a businessman. However, Mireille and Kirika later discover that their targets were also hired to kill them. Back in the apartment, the duo speculates the connection between this and Kirika’s fake documents.

Episode 4: “The Sound of Waves”
Mireille and Kirika travel to Ulgia with the objective of eliminating Atride Corporation’s top executives. However, Atride receives a tip about Noir’s location, and immediately sends the military to kill them.

Episode 5: “Les Soldats”
Mireille and Kirika’s investigation continues. After a firefight against a group of men, Mireille deduces that their enemy is called Les Soldats. Moreover, Mireille reveals some of her pas