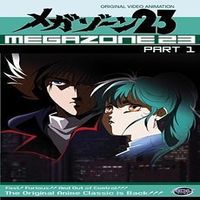 The action begins when biker Shougo Yahagi’s lousy week turns into a fight for his life. The military’s after him, the government want him dead and now his new set of wheels seems to be a transforming robot! But that’s only the beginning of his problems, because it looks like the world he’s lived in his entire life may not even be real! Now his only hope is a beautiful AI program that may or may not be telling him the truth about the fate of the human race! Does the future of mankind lie in the hands of a handful of street racers?