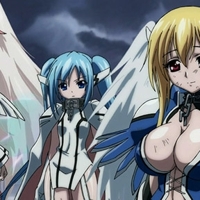 Heaven’s Lost Property (???? Sora no Otoshimono.
Tomoki Sakurai is a pervert teenage boy whose motto is “Peace and quiet are the best,” and often dreams of meeting an angel. He finds it difficult to live in comfort when he has to put up with Sohara Mitsuki, his next-door neighbor with a killer karate chop; Eishiro Sugata, an eccentric pseudo-scientist bent on discovering the “New World”; and Mikako Satsukitane, a sadistic Student Council President. One night, while he was witnessing a strange anomaly in the sky, an UMA (Unidentified Mysterious Animal) crash-lands nearby. Tomoki discovers what fell from the sky is a winged female humanoid named Ikaros from an unknown world of Synapse, who soon declares herself to be Tomoki’s servant. From then on, more creatures known as “Angeloids” arrive; with this, he loses his peace and quiet, but at the same time finds pleasant things the Angeloids bring him, and fight the forces that fall upon Earth.