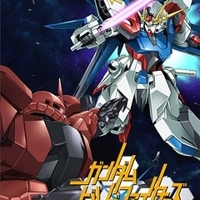 The story revolves around Sei Iori, a young Gunpla Builder and student who has a dream of becoming the best Gunpla Fighter in the tournament and someday become as good as his father. As the only child, his family owns a small Gunpla shop and his talent is well-honed, however his weak piloting abilities have led him to a series of first-round losses. But one day, he meets a strange boy named Reiji, who helps him out. Reiji gives him a jewel, promising that he will come to Sei’s aid if wished enough. Together, both of them will tackle the world of Gunpla Battle and compete in the tournament using Sei’s customized Gunpla, the GAT-X105B Build Strike Gundam.