Conan, The Boy In Future [TV] 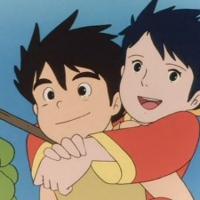 The story begins in July 2008, during a time when humankind is faced with the threat of extinction. A devastating war fought between two major nations with ultra-magnetic weapons far greater than anything seen earlier brings about total chaos and destruction throughout the world, resulting in several earthquakes and tidal waves, the earth thrown off its axis, its crust being rocked by massive movements, and the five continents being torn completely apart and sinking deep below the sea.

An attempt by a group of people to flee to outer space failed, with their spaceships being forced back to earth and vanishing, thus shattering their hopes. But one of the spaceships narrowly escaped destruction and crash landed on a small island which had miraculously survived the devastation. The crew members of the spaceship settled there, as if they were seeds sown on the island.

Amidst these survivors, a boy named Conan is born on October 2010, bringing a new ray of hope to the earth. After several years, during which most of the other survivors had died and the only people left on the island were Conan and his grandfather, he meets a young girl named Lana, and their adventure begins.

Between the different islands left in the world: Industria, High Harbor, Remnant, and others, the group travel and conflict rises between good and evil.