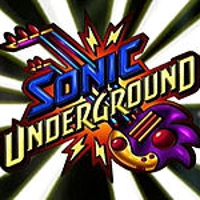 The show takes place in a separate canon and continuity than any other Sonic the Hedgehog media. Queen Aleena, the kind and fair ruler of Mobius, was overthrown by Dr. Robotnik and his robotic armies. Robotnik seized control of the planet and forced her into hiding. To preserve the dynasty, Queen Aleena separated and hid her three children: Sonic, Manic and Sonia after the Oracle of Delphius told her of a prophecy: one day they would reunite with their mother to form the “Council of Four”, overthrow Robotnik, and become the rightful rulers of Mobius once more. Meanwhile, Dr. Robotnik did his best to set up an autocratic government, and legally turned anyone who stood against him in robots devoid of freewill, and forced the nobles into paying large amounts of money to him as tribute.
When Sonic, Manic and Sonia grew up, the Oracle of Delphius revealed the prophecy to them: So Sonic, Manic and Sonia decided to go on a quest, searching throughout Mobius for Queen Aleena. Dr. Robotnik, with the assistance of the bounty hunters Sleet and Dingo, tries constantly to capture the royal family and prevent the prophecy from being fulfilled.
The three siblings have powerful medallions that can change into musical instruments, and also weapons when the triplets are in perfect harmony with each other. Sonic’s medallion is an electric guitar. Sonia’s medallion is a keyboard that functions as a smoke machine, Manic’s medallion is a drumset that can be used as an “earth controller” with cymbals that can deflect laserfire. All of the medallions can be used as laser guns. The three use the amulets not only to fight Robotnik’s forces but to also as instruments for their underground (illegal) rock band, “Sonic Underground”.