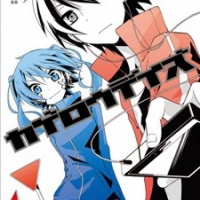 A story based on the new popular series of songs by Jin (Shizennoteki-p) titled “Kagerou Project (Heat-Haze Days)”. Shintaro Kisaragi—a HikiNEET who shut himself inside his room for 2 years—has been living his life normally until he met a cyber girl named Ene, who appeared in his computer screen when someone anonymously sent him a mysterious e-mail with an attached file—which was Ene—one year ago. One day, Ene had been messing up with Shintaro’s PC. which causing him to go to the outside world for the first time in 2 years.