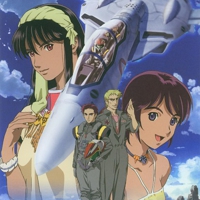 Macross Zero is set in 2008 A.D., one year before the events of the original Macross series, depicting the final battles of the U.N. Wars between the U.N. Spacy and the Anti-UN forces, and is also set in the South Pacific, where a gigantic alien spaceship crash landed 9 years earlier. Amidst the violence, a U.N. Spacy F-14 KAI pilot named Shin Kudo is attacked by a strange enemy aircraft that can transform itself into a robot. Crash landing on Mayan Island he learns that this remote island and its peaceful native inhabitants hold a great secret linking them to the alien space ship and would become the focus of the war, whether they like it or not. Shin eventually returns to his carrier fleet and joins the Skull Squadron, who also operate brand new transforming fighters, the VF-0 Phoenix. He trains and engages Anti-UN forces operating from a converted ballistic missile submarine as both sides fight to locate and control alien artifacts, with the peaceful and agrarian Mayan caught in the middle of the war.