Ghost in the shell [Manga] 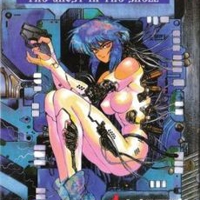 Ghost in the Shell (? THE GHOST IN THE SHELL K?kaku Kid?tai Za G?suto In Za Sheru?) begins in 2029, and revolves around Major Motoko Kusanagi’s (commonly known as “the Major”) hunt for a cyber-criminal known as “the Puppeteer” (the Puppet Master in the film), whose real identity is unknown. The Puppeteer commits a large number of crimes by the act of breaking into and taking control of human minds known as “ghost hacking”. During an investigation of a missing robot, Japanese secret service Public Security Section 9 discover the robot is the Puppeteer, who is actually a unique autonomous artificial intelligence project, known as Project 2501, and was created by the Treaty Bureau of the Ministry of Foreign Affairs, known as Section 6. Attempting to gather more information, Kusanagi brain dives into the Puppeteer. However, its consciousness was collapsed, and was presumed destroyed, but Kusanagi believes that it is still alive and that she can sense its presence.2 One year later, after accidentally killing a suspect in a covert operation, Kusanagi instigates hostage situation in order for Section 9 to avoid blame for her previous actions.3 She escapes with the help of Batou to find a new body for her, however she discovers the Puppeteer is still alive in her cyber brain. In pursuit of its evolution, the Puppeteer proposes to merge with Kusanagi. Kusanagi, although initially skeptical, agrees to allow the Puppeteer to merge with her own consciousness. After merging with the Puppeteer, Kusanagi awakes in one of Batou’s safes house and in a new body provided by Batou. Batou asks her what she will do next, in which Kusanagi replies that she does not know but states that “the net is vast”

this is from wiki