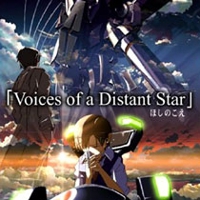 A middle-school girl named Mikako Nagamine is recruited to the UN Space Army in a war against a group of aliens called the Tarsians, named after the Martian region (Tharsis) where they were first encountered. As a Special Agent, Mikako pilots a Tracer, a giant robotic mecha as part of a fighting squadron attached to the spacecraft carrier Lysithea.

When the Lysithea leaves Earth to search for the Tarsians with Mikako on board, Mikako’s friend Noboru Terao remains behind. The two continue to communicate across interplanetary, and eventually interstellar space via the email facilities on their mobile phones.

As the Lysithea travels deeper into space, the emails take increasingly longer to reach Noboru on Earth, and the time-lag of their correspondence eventually spans years.

The narrative begins in 2047. Mikako is apparently alone in a hauntingly empty city, trying to contact people through her cell phone. She finally says, in an empty classroom with stacked chairs, “Noboru? I’m going home, okay?”, a rhetorical question which is answered with a busy line on her cell phone. Then she wakes up to discover that she is in her Tracer orbiting an alien gas giant. She then goes to Agartha, the (fictional) fourth planet of the Sirius System, .

In the middle of the anime proper, she sends an email to Noboru (which shows the date 2047-09-16), with the subject “I am here”, saying “to the 24-year old Noboru, from the 15-year old Mikako” which would only reach him 8 years, 224 days and 18 hours later, and just hopes it reaches him. Some flashes of imagery, perhaps indicative of memory, a hallucination, or even a mystical encounter, are then shown. It is a morphing character that looks like a younger Mikako. While they’re speaking however, that character morphs into a Tarsian and then into an older version of herself. The same room where she woke up in the beginning of the animation is presented again, with the same ambience, but this time she is squatting in the corner,