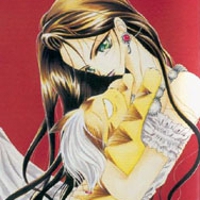 Centuries ago in an epic battle, King Phelios defeated the Vampire-King Duzell. Using a powerful spell Phelios destroyed Duzell but he perished as a sacrifice for using such a strong spell. As both laid dying, Duzell swore that he would be reincarnated to find Phelios’ reincarnation and when he did he would drain Phelios’ blood, rip his body limb from limb and laugh while his soul writhes, damned for eternity to a lake of fire. A century later, Duzell is reborn as a wildcat called a kyawl. Unfortunately, he can’t find the reincarnation of the now Saint Phelios. Luckily, he is adopted by his nemesis’ great-granddaughter, the 15-year-old princess Ishtar, through whom Duzell may be able to find the reincarnation of Phelios. The fate of the ages is reborn, and the vampire game begins.