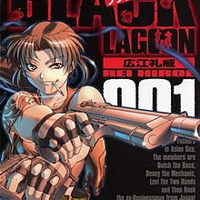 The story follows a team of pirates/mercenaries known as Lagoon Company, that smuggles goods in and around the seas of Southeast Asia in the early to mid 1990s.1 Their base of operations is located in the fictional harbor city of Roanapur in southeast Thailand (somewhere in the Amphoe Mueang Trat district, likely on the mainland north/northeast of the Ko Chang island or on the island itself).2 They transport goods in the 80-foot (24 m) Elco-type PT boat Black Lagoon Lagoon Company does business with various clients, but has a particularly friendly relationship with the Russian crime syndicate Hotel Moscow. The team takes on a variety of missions—which may involve violent firefights, hand-to-hand combat, and nautical battles—in various Southeast Asian locations, even going as far as Phu Quoc island of Vietnam and when not doing much, the members of the Lagoon Company spend much of their down time at The Yellow Flag, a bar in Roanapur which is often destroyed in firefights.
Characters