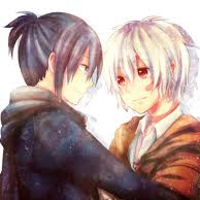 The story takes place in the “ideal” and perfect city known as “No.6”. Shion, a boy raised in the elite and privileged environment of his home, gives shelter to another boy, who only gives his name as ‘Nezumi’ (meaning Mouse or Rat) on the former’s 12th birthday. After spending a rainy night with his new friend, Shion discovers the next morning that Nezumi has disappeared without a trace. Shion receives information via a intercommunication bracelet, issued to all citizens, that there is a boy on the loose and that Shion is to report having seen the suspect or not. When he does not comply to demands, the government strips him of his privileged status and he moves to the ghettos of the city. Four years later, Shion experiences a spate of incidents around him in which a deadly infection by parasitic bees causes its victims to age rapidly and start to decompose at an alarming rate. Shion’s co-worker is one of the victims and Shion is arrested on suspicion of insubordination to the city. While Shion is being transported to the Correctional Institute, Nezumi appears and rescues him. Shion begins to find out the hidden truth behind the ideal city No.6