My Little Sister Can't Be This Cute [TV] 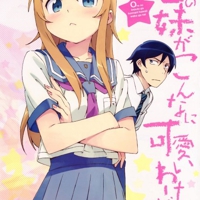 Kyosuke Kosaka, a normal 17-year-old high school student living in Chiba,3 has not gotten along with his younger sister Kirino in years. For longer than he can remember, Kirino has ignored his comings and goings and looked at him with spurning eyes. It seemed as if the relationship between Ky?suke and his sister, now fourteen, would continue this way forever. One day however, Kyosuke finds a DVD case of a magical girl anime which had fallen in his house’s entrance way. To Kyosuke’s surprise, he finds a hidden eroge (an adult game) inside the case and he soon learns that both the DVD and the game belong to Kirino. That night, Kirino brings Kyosuke to her room and reveals herself to be an otaku with an extensive collection of moe anime and younger sister-themed eroge she has been collecting in secret. Kyosuke quickly becomes Kirino’s confidant for her secret hobby.