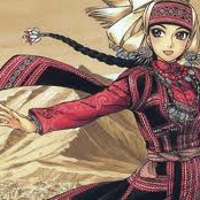 A Bride’s Story is a historical romance manga by Kaoru Mori. It was published by Enterbrain in the magazine fellows! and is so far collected in 3 tankobon volumes. The manga is licensed in English in North America by YenPress. Volume 1 was released in a hardcover format in May 2011.

Set in Central Asia in a rural town near the Caspian Sea during the early 19th century, the story revolves around a young woman, Amir, who arrives from a distant village across the mountains to marry Karluk, a boy 8 years her junior. The story unfolds among details of every-day family and community life. However, the peaceful atmosphere is disturbed when Amir’s family demands to take her back to their village.

Amazon
Manga Rating
8.2/10
69 users added this.
Similar in these categories.