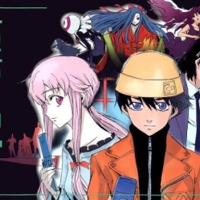 Mirai Nikki (literally Future Diary) is a dark manga about the asocial Yukiteru Amano, who obsessively keeps journals. One day, he finds that his imaginary friend Deus Ex Machina, the lord of time and space, has made his cell phone diary able to predict the future. After getting over the initial shock of having a supernatural cell phone, Yuki enjoys his newfound powers until he comes across a diary entry stating his exact time of death…
After taking out his would-be murderer, Yuki is invited to a gathering with ten other people, where Deus explains that they are now in a Battle Royale for the position of God. Some of the diary holders have personal reasons to claim the throne; others are psychotically insane. And soon enough, young Yuki finds himself without any true friends or allies aside from the curiously Yuki-obsessed participant, Yuno Gasai…