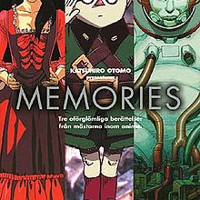 Memories consists of three dazzling stories, each delivered with its own astonishing style. “Magnetic Rose,” based on a manga short by Katsuhiro Otomo, concerns two space travelers following a distress signal drawn into a magnificent world created by one woman’s memories. In “Stink Bomb,” a young chemist accidentally transforms himself into an unstoppable biological weapon set on a direct course for Tokyo. “Cannon Fodder” depicts a day in the life of a city whose entire purpose is the firing of cannons at an unknown enemy.