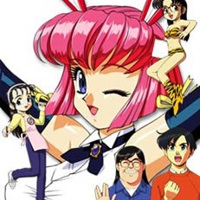 A normal man who slowly slips in to the life of being an otaku and never returns. In this 1991 OVA by at the time newcomer animation studio Gainax,Ken Kubo, an ordiary Japanese man lives quite happily during the year 1982 with his girlfriend Yoshiko and as a member of his college’s tennis team, until he meets one of his former friends from high school, Tanaka. After Tanaka brings him into his circle of friends (all of them being otaku, too: a female illustrator, an information geek, a martial artist, and a weapons collector), Kubo soon makes the wish to become the “Otaking”, the King of all the otaku. A controversial and humorous part of Otaku no Video was the inclusion of live-action documentary excerpts, titled “A Portrait of an Otaku”. In these segments, the documentary crew would interview an anonymous otaku, typically ashamed at being a fan and whose face are censored with a mosaic and have their voices digitally masked. The mock documentary segments serve as a counterpoint to the anime: while the anime emphasizes the camaradrie, creativity, and dreams of mainstream acceptance of otaku, the mock interviews exaggerate its negative qualities. The subjects run the gamut of the otaku subculture: the interviews cover a cosplayer who now works as a computer programmer and outright denies his cosplay days, even when presented with photographic evidence, but keeps his Char Aznable helmet in his desk drawer, an airsoft otaku, a garage kit otaku, and a shut-in who videorecords television programs for trade, but has not actually watched anything he’s recorded. The interviews also contain fans who engage in a range of illicit or unsavory activities, such as cel thieves, a pornography fan attempting to manufacture glasses to defeat the mosaic censorship common in Japanese porno videos, and a computer gamer famous Gainax member Hideaki Anno obsessed with a character in a hentai computer game (Noriko from Gunbuster one of Anno’s works who makes a cameo in Gainax’s own hent