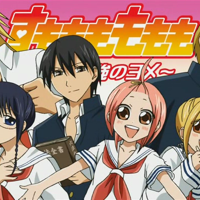 Sumomomo Momomo revolves around the life of Koshi Inuzuka, a normal high school student who is aspiring to become a prosecutor after graduating. One day, a strange girl named Momoko Kuzuryu approaches him and informs him that they are betrothed and expected to produce a strong child together, though Koshi does not accept it. The betrothal came about after Koshi’s father and Momoko’s father both arranged the marriage between their respective kids. After Koshi and Momoko’s initial meeting, Koshi realizes that Momoko is not just a normal, though however strange, girl, as she has been trained by her father in a special form of martial arts that only twelve such families in all of Japan are able to possess. These twelve families coincide with the twelve animals of the Chinese zodiac, where Momoko is from the family associated with dragons, while Koshi is from the family associated with dogs. The dragon family is the head of the six families of the west, whereas the dog family is the head of the six families of the east.

Before long, it is revealed to Koshi and Momoko that five of the six western families are out on a plot to assassinate Koshi to prevent him from marrying Momoko, which would cement the twelve families together by bonds of blood. This assassination would be the start of a martial artist war, which would be the seventh such war of the twelve Zodiac Masters of Japan. Koshi must now fight for his life as Momoko protects him, hoping he will return her affection.