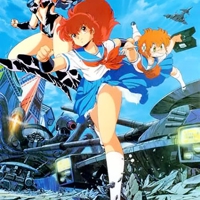 Project A-ko (??A?, Purojekuto Eeko?) is an animated movie that led to later releases set in the same series, and spinoff release as well. This parody series references a number of other works of anime from the 1970s and 1980s. The title itself is a reference to the 1985 Jackie Chan movie Project A (the film bears no resemblance to Project A, and Project A-ko was originally just a temporary working title for the film, but it ended up sticking). The opening of the film takes place in orbit and follows a spacewalk in progress when an unknown object crashes thru the astronauts’ support craft down to the earth below. Some years later, a highly developed city has been built in the impact crater (with similar overtones to Macross’s setup). The plot revolves around Eiko (or, “A-ko,”) Magami, a red-haired teenage girl, and her best friend is Shiiko (or, “C-ko”) Kotobuki, a bubbly, carefree, optimistic blonde. During their school days, A-ko displays unexplained superhuman feats of speed and strength, usually in an effort to get to school on time. The two girls transferred to an all-girls high school and catch the attention of Biko (or, “B-ko”) Daitokuji (who wears a hairstyle reminiscent of Lynn Minmei). B-ko, who is from a rich family and is herself a brilliant student, develops a sudden interest in isolating C-ko’s time all to herself and push A-ko out of the way.