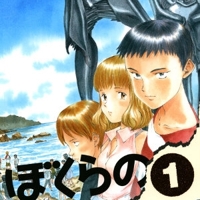 During a summer camp, 15 children, 8 males and 7 females, find a grotto by the sea. Deep within they discover working computers and some electronic equipment, and later the owner, a man who introduces himself as “Kokopelli”. Kokopelli claims to be a programmer working on a brand new game, in which a large robot has to defend the Earth against fifteen alien invasions. He persuades the children to test the game and enter into a contract. All but one of them agree, and a moment later they mysteriously awaken on the shore, believing what happened was just a dream.

The next night, a small creature calling himself “Koyemshi” appears and claims to be their guide. He then teleports the children into the black robot. Takashi Waku is the first pilot of the robot, which is named “Zearth” by Maki Ano. Upon winning the fight, Waku is accidentally ‘knocked’ into the sea by Jun Ushiro. The second pilot, Masaru “Kodama” Kodaka, dies unceremoniously after defeating his opponent. Koyemshi explains to the children that Zearth runs on life force, and the cost of every victory would be the life of its pilot.