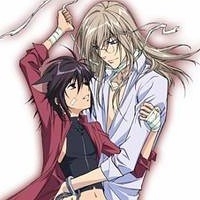 Ritsuka Aoyagi, a young boy suffering from amnesia, is approached by a stranger who claimed to know his brother Seimei before he was mysteriously murdered two years ago.

After accessing Seimei’s laptop, Ritsuka discovers that his brother and the stranger – Soubi Agatsuma – were once fighting pairs involved in spell battles. Now with his brother gone, Ritsuka has inherited Soubi as his fighting unit, and together they must find the truth behind The Seven Moons and Seimei’s murder.

Loveless is an anime adaptation of the fantasy-romance manga series written by Yun Kouga under the same name. Produced by J.C. Staff, the anime series aired a total of 12 episodes between April 7, 2005 and June 30, 2005. The show’s art and story — especially how the relationship between its main protagonists got handled – was received quite well by viewers.

Ritsuka Aoyagi
Ritsuka is a young 12-year-old boy, and is the main protagonist of the series. Despite his young age, he is acts surprisingly more mature, except when it comes to sexual relationships. He was abused by his mother during his childhood, resulting in his complicated and conflicting behavior.

Soubi Agatsuma
Soubi Agatsuma is a 20-year-old art student, and was Seimei’s former partner. He previously attended the Seven Moons Academy, where he was thought by Ritsu. It was Ritsu who was responsible for the loss of Soubi’s ears. However, it was not specified if the act was consensual or otherwise. He later then becomes Seimei’s fighter unit, after the latter carved a name on his neck. After Seimei’s death, he was tasked to contact Ritsuka.

Episode 1: Breathless
Shortly after the mysterious death of his brother, Aoyagi Ritsuka is approached by Soubi Agatsuma, who claims to be his brother’s close friend. Ritsuka’s shock and confusion only worsened after the stranger who he just met confesses love to him. Before he could think and react, two childre

lyakomy @lyakomy commented on Loveless [TV]
lyakomy @lyakomy
Feb 16, 18 at 9:20am
I really like the Anime and even more the Manga. If only it was like this in real life, having a bond to someone given by fate.