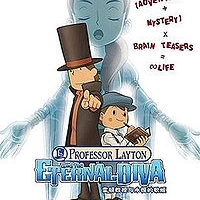 Layton receives a record in the mail from a famed opera singer, Jenis Quatlane. Layton remind Luke of their adventure with her, and the flashback begins. After the events of Professor Layton and the Specter’s Flute, Layton receives a letter from a former student of his, Jenis Quatlane. Jenis writes that she is performing at an opera house called the Crown Petone, and there have been many strange things happening. In addition, two young girls from the London area have been reporting missing, and Jenis thinks its related to the strange things happening at her theatre. She includes two tickets, Layton and Luke attend, while Remi decides to stay back in London with Doctor Schrader in search of the missing girls. Layton and Luke arrive as the enormous Crown Petone theatre which was built on the Atlantic Ocean. Layton and Luke take seats in the front row, and enjoy the opera. After its over, Layton and Luke begin to clap, but the rest of the audience seems bored. Then, as the stage is cleared, a masked man comes out and begins talking about the Eternal Life. He says, we will all play a game, and whomever wins, will get the Eternal Life. Inspector Clamp Groski then goes to make an arrest on the masked man, to see the stage fall apart beneath him, dropping him into the ocean. The masked man then reveals the losers will die. The audience breaks into a mass panic, and its up to Layton and Luke to stop the masked man.