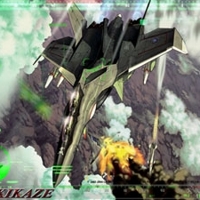 Yukikaze occurs in the near future. Some decades ago, an alien force known as the JAM invaded Earth through a dimensional portal that appeared over Antarctica. The United Nations established a defense force to oppose the threat and after a series of bloody battles, managed to push the enemy back to the other side of the portal, which is a planet named “Fairy” by the humans. However, the battle still rages on. The main character, Rei Fukai, pilots the Super Sylph B-503 fighter, nicknamed “Yukikaze”, an advanced armed tactical reconnaissance plane equipped with a near-sentient AI computer system, and belongs to the Special Air Force (SAF), the strategic recon wing of Fairy Air Force (FAF). Based on the novel by Ch?hei Kanbayashi. 2002-2005. Gonzo. 5 episodes.