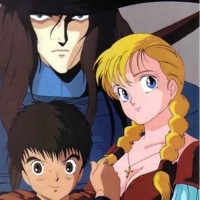 Set in 12090 AD. While making her rounds, the whip-wielding seventeen-year-old Doris Lang, daughter of a deceased werewolf hunter, is attacked by Count Magnus Lee, the long-vanished vampire lord said to be over 10,000 years old. Out of sheer boredom, Magnus intends to make Doris his new zombie-like vampire bride, marking her with a telltale bite. Doris later encounters a reticent and mysterious horseman, D (the first wandering hunter she has been unable to drive away or defeat), whom she hires to protect her from the vampires. Based on the novel by Hideyuki Kikuchi. 1985.