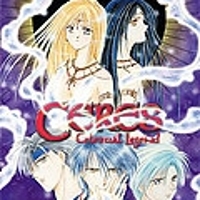 Ayashi no Ceres is the story of Aya Mikage and her twin brother Aki who are driven apart by the forces of fate. On their sixteenth birthday, Aya and Aki are called to the family home to be given a special present. What they thought was a birthday party, however, was really a test—one which Aya failed. She was found to possess the reincarnated spirit of an ageless tennyo, one bent on the recovery of her hagoromo and the destruction of the Mikage family. Aya quickly found herself separated from her beloved brother, and hunted by her own family.