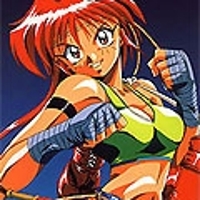 Ayane Mitsui is a High School student who wants to become a pro wrestler. She sets this as her most important goal, neglecting school and other responsibilities. This is Ayane’s ultimate dream. At the beginning of the tape we find Ayane at the All-Japan Women’s Pro Wrestling Try-Outs. She fails to get accepted yet afterwards meets a strange old man who saw her audition. He tells her that she has great legs and wishes for her to join his Dojo so that he could train her. She accepts and training begins that night. They start by building the ring, and then continue the next day after school with practicing kicks. Ayane practices everyday while having to hide these events from her mother and her school’s assistant principal who detests violent sports. After weeks of hard training we find Ayane going in to take a test which she thinks is for Pro Wrstling, but in actuality it’s for kickboxing. Totally off the road of her goal, she blindly follows the trainer in her quest to become a wrestler. Her trainer is constantly hiding his real intentions from her (to be a kickboxer) throughout the entire tape until Ayane’s debut fight. All is pulled out into the open as she finally discovers what she has gotten into as the bell is rung…