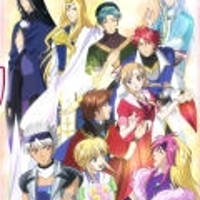 There is a world where a queen governs a universe. It is said that the queen lives in a sanctuary at the center of the universe and there are 9 god-like male guardians called “Shugosei” who wait on her.

A 17-year-old girl named Enju is suddenly chosen as the legendary Etoile who saves the universe. She is always alone and she doesn’t think she is anything special, because of that she felt she was not worthy enough for the Shugosei even though they greet her warmly.

Enju is bewildered by an important call…

Now, being supported by the Shogosei, her journey to discover herself begins.