Mei and the Kitten Bus, Mei to Konekobasu 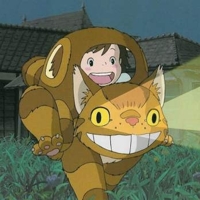 This is a short film about 20 minutes long, which was shown for a limited time only at the Ghibli Museum. It tells the story of Mei and her friend the kittenbus (the child of the original catbus from My Neighbor Totoro). Mei is just small enough to ride in the kittenbus, which is only big enough to stir up dust devils, rather than making whole fields of rice sway in its breeze. One night they have an adventure in which they fly into the forest with many other cat-based vehicles, including many buses and trains. There they meet Totoro and many similar spirits, all heading for a gigantic catliner. This liner cruises off into the sky and the kittenbus takes Mei home.