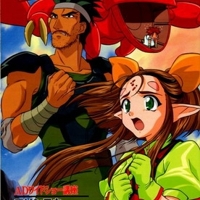 Legend tells of how long ago God became displeased with how unjust Humanity was, and punished them for it. But eventually a human arose and defeated God, which bled fog all over the earth. New gods were born from the fog who only watched over humanity, while the God Hunter faded into the mists of legend. That is, until he was found by an ambitious nation in a young boy named Yorun. Now he is on the run with his guardian Goshizoku towards an uncertain destiny, pursued by the comical Yanuesu and the dangerous Yurugaha, inhabitants of the great island Edens which float over the earth, while quietly keeping watch over him is a young girl with her own secret.