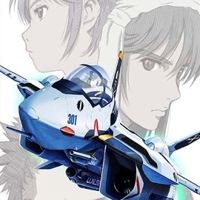 It was 1999 when a huge extraterrestrial battleship fell down to the Earth and brought superior technology which led to the beginning of war between U.N and Anti-U.N. Eight years have passed, so many veteran pilots were lost one after another, so even boys in their teens were gathered into the battlefield to fight the war.

Shin Kudou, a young U.N F-14 pilot and the main character of the story gets shot down by an unknown enemy ship during a sortie and crash landed on a solitary island.

Now, both of U.N and Anti-U.N are going to invade the island for the quest of recovering the legacy and the superior technology it posesses…
(taken from Animenfo)