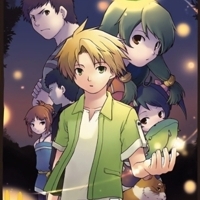 “I wonder what I want to do…” The boy who doesn’t discover anything about himself. One day during summer vacation, in the forest of the rural village that he visits, he encounters a strangle little child accompanied by fairies of light.

“I’m not needed by anyone…” The girl who doesn’t accept herself. One day during winter, she comes across a wounded fairy of light in a street corner in the city.

A pure heart is what will save this world, which has now started to come apart. “Zettai Shounen” is a story about the boy and girl who are guided along by fairies of light to save the world.

“Aizawa Ayumu is a middle-school boy who does not attend school. He is currently spending the summer with his father in a rural town two hours away from Tokyo. His parents are divorced and this is the first time he will be seeing his father after a span of four years. Ayumu was initially reluctant to go but his mother offered him a mountain bike if he went. After having been in town for a few days, it seems that everything has been slightly odd lately. The flowers bloom out of season, weird lights appear in the sky and the people are acting in strange ways. Then one day, while riding his bicycle, Ayumu encounters a young boy named Wakkun who wants to play with him. Ayumu agrees but then finds the boy gone and a small spaceship flies into the sky.”

“Kisa Tanigawa is a high-school girl living in Yokohama who’s shut herself from the world. She neither visites the school anymore, nor does she frequent with many people. One evening on her way home, she spots some spheres of light fighting each other near a bridge and follows them. She finds one of those spheres, seemingly wounded, later in a tunnel and takes it home where she gives it a name, Bun-chan, for the sound it makes. When awakened before next dawn by it, she takes a look outside and sees a large object looking like an ufo above the city. It grows clearer for a moment and then disappears.”