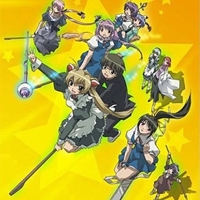 Ayumi Mamiya is a witch, cursed to lose her powers. She only has one chance of breaking this spell, and that lies upon a seemingly normal boy, Haruo Yoshikawa.
Haruo, ignorant to the existence of magic, has his 3 witch sisters protecting him. The Yoshikawa sisters will do anything to protect Haruo, especially from Ayumi Mamiya, who now has plans to awaken his latent magical powers.

Magikano is an anime adaptation of the romantic-comedy manga series under the same name, written and illustrated Takeaki Momose. Produced by studio Tokyo Kids under the direction of Seiji Kishi, Magikano aired a total of 13 episodes between January 3, 2006 and March 28, 2006.

Episode 1: “Is She Really a Magical Girl?”
Haruo encounters Ayumi on the street, but she suddenly disappears, leading him to think that he saw a ghost. The next day, Ayumi appears at Haruo’s school, and is introduced as a transfer student to their homeroom. Ayumi covertly uses her magic to deal with two bullies, which then alerts the witch sisters of Haruo. Later, Haruo finds Ayumi asleep on their couch, and learns that she will be now working as a maid for the Yoshikawa household. Not so long after, Ayumi’s curse is revealed, but she is permitted to stay nonetheless.

Episode 2: “Is The Student Council Head Really a Magical Girl?”
Ayumi instantly becomes popular and is idolized by the boys in their school, which upsets the Student Council President Yuri Kurosu. In an attempt to compete with Ayumi and ultimately deflate her popularity, Yuri goes more outgoing and engaging with the male students. This rivalry escalates rapidly, leading to a fashion competition that turns the school into a festival-like event. With neither having no plans of losing, they both start to use magic and turns the harmless fashion show into a battle against opposing fans.

Episode 3: “Are They Really a Pair of Dangerous Siblings?”
Ayumi creates a portal into Haruo’s dream, with the goa