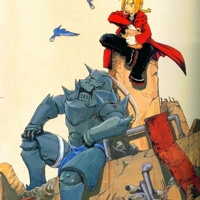 In this world, there exist people with special abilities to manipulate objects and transform those objects into other objects. These people are known as alchemist. However, this manipulation process does not come without cost, as the basic alchemy rules stated that something with equivalent cost is needed to perform the manipulation.

The main character is a famous alchemist named Edward Elric, who loses his little brother Alphonse in an accident. Edward manages to contain his brother’s soul in a large piece of armor suit. But by doing so Edward loses his arm and leg, so now they are on a journey to regain their original bodies.