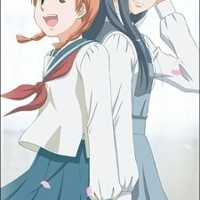 The story follows Fumi Manjoume, who reunites with her childhood friend Akira Okudaira after 10 long years. Despite attending different high schools, their respective romantic relationships tangle. They try to resolve their problems together, discovering hidden feelings in the process.

Aoi Hana, also known as Sweet Blue Flowers, is an anime adaptation of the yuri manga series under the same name, written and illustrated by Takako Shimura. Produced by J.C. Staff, the show aired a total of 11 episodes between July 2, 2009 and September 10, 2009.

Fumi Manjoume
First year high school student at Matsouka Girl’s High School, Fumi Manjoume is a shy and sensitive girl. She spent most of her childhood with Akira Okudaira, who acted as her bodyguard and comforted her whenever she cried. Fumi had her first romantic relationship with her cousin Chizu. She later learns that Chizu is about to get married.

Akira Okudaira
First year high school student at Fujigaya Girls Academy, Akira Okudaira is an outgoing girl, and is easily spooked by ghost stories. Though meaning no harm, she usually spills her friend’s secrets while giving other people advice.

Yasuko Sugimoto
Yasuko is captain of their school’s basketball team, and is quite popular. She became Fumi’s girlfriend, and shared a kiss at the school library.

Kyouko Ikumi
Kyouko is Akira’s classmate, and is in love with Yasuko, despite being rejected. She is engaged to Kou (in name only), and is also quite popular at their school.

Episode 1: Flower Tales
On the first day of commute to their own schools, Fumi and Akira cross paths but fail to recognize each other. They have been childhood friends, but have not seen each other for 10 years. It is only later that, after Fumi and her mother visit Akira’s household, they remember. Fumi studies at Matsouka Girl’s High School, while Akira studies at Fujigaya Girl’s Academy. Later, Fumi learns that h