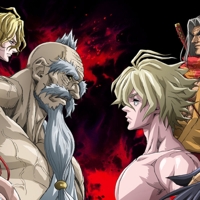 Every 1000 years, the Gods’ Council assembles to decide the fate of humanity. After 7 million years of human history, the gods come to the decision that humans are irredeemable and must go extinct. However, the valkyrie Brunhilde proposes to give humanity one last chance to prove their worth and the gods agree to hold the battle of Ragnarok, a tournament with 13 notable humans from across history against 13 of the most powerful gods engaging in duels to the death. Humanity will be spared if their side achieves 7 victories in the competition. To even the odds, each human is granted the assistance of a valkyrie who transforms into a powerful weapon tailored for their user’s combat style called “Volund”, at the risk of losing her life if the user is killed.